I am typing this knowing full well I have nothing meaningful to blog about other than the fact that we have all made history as Kenyans by voting on the proposed new constitution of Kenya. As we speak the vote tallying is still going on but I’m pretty confident that the popular ‘Yes’ vote will carry the day.

And now, I shall bore you with the mundane details of this historic day. I promise never to do this again but only for today, just humour me.

Like every first date I’ve ever been on, I could hardly sleep the night before. For me, today was a “Niko na *blind* date” event because I have never voted before in my quarter of a century lifetime. So I stayed up past midnight, distracting myself on twitter, facebook and skype while contemplating what the Referendum day would hold. But eventually sleep got the better of me and I called it a night.

I woke up (around mid-morning-ish) to a text from Kipepeo who I later found out had been up super early to vote. I sat in bed, going through my facebook timeline and realised that almost every kenyan had voted going by their fb “statii” (plural of “status”, according to Kipepeo). Meanwhile I’m busy trying to log on to my mobile twitter account via Dabr but it was acting up so, I posted this status on fb, replied to her text and hopped in the shower.

My day had begun!

Before leaving the house, I had an interesting chat with ma dukes who. for the first time openly admitted that she regretted not having gone out and registered as a voter. She spoke to me about the importance of the day and how she is glad that atleast there is one family member that will be voting and that I would be voting for the whole family…blah, blah. Ok, good stuff! So I left.

The polling centre where I registered is about 15 minutes walk from my place so I was there before 11pm. I got to the Primary School and was slightly scared because there were so many cars parked both inside and outside the school so I knew the queues would be relatively long. Then again, this wasnt a General Election, just a Referendum vote so it couldnt be that bad right? At this juncture, I’d like to take my hat off to the IIEC for their exemplary planning and organising of the polling process. The whole place was split alphabetically according to voters’ surnames so as soon as you set foot on to the school compound, a kind welcoming IIEC personnel would ask you for your voter’s card and surname then direct you to the respective polling room. There was an atmosphere of soberness and calm about the polling station with wanainchi of all shapes, sizes and ages moving in and out with relative ease. As for the wardrobe, the majority of them tried to steer clear of the Referendum colours and instead wore neutral colours. But I couldnt resist wearing my Shujaa Rugby jersey! Just because..hehe.

After being directed to my polling area, I joined the queue and watched people go in and come out, one after the other… slowly..

I was at the door and about to be called in to go through the numerous checkpoints before getting to the cardboard booth in the corner..

Before I knew it, it was all over and I was strolling out of the class-room.

And after pmsing for the better part of the day, my mobile twitter finally decided to work so I logged in on dabr and made a quick shout-out to my boy B.O: 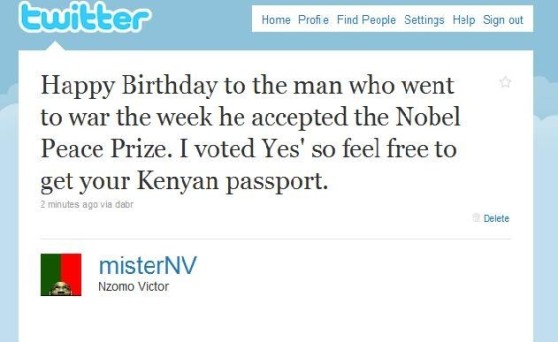