A wag of my finger goes to Morgan Tsvangirai, leader of Zimbabwe’s main opposition Movement for Democratic Change (MDC) and Prime Minister designate who seems to have dashed all our hopes that he would finally grow a pair and challenge Mugabe to dissolve parliament and call for fresh elections or atleast restore lasting hope to his people and provide new, much-needed leadership in Zimbabwe.

In order to understand just how much of a let-down Cde Tsvangirai has been, consider these excepts taken from yesterday’s interview on SW Radio Africa’s programme “Hot Seat”.

Interviewer: Now let’s start with what happened on Thursday, Robert Mugabe, the man you have pledged to form a unity government with, actually lashed out on Thursday and called you a prostitute when he was addressing mourners at the burial of Elliot Manyika and he said, I quote: “Today you are in Senegal, tomorrow you are in that country, ndochii ichocho? (What is that?) Chihure ichocho (that is prostitution)”. Now Mr Tsvangirai, are you cheating on Mr Mugabe?

Mr Tsvangirai: Well first of all I think that my response to those kind of remarks is that people must actually feel sorry for a man who has lost his mind. It is indecent, un-African, it shows you the kind of man – no wonder why people are sceptical about his commitment to co-habitation, co-sharing the power. It really demonstrates the extent to which the man has lost any sense of decency, any sense of African culture, in front of women, children and men.

Interviewer: So with statements like that Mr Tsvangirai, do you think you can work with a man like that?

Mr Tsvangirai: Well you must understand that when we signed the power sharing agreement on the 15 September we were very hopeful that this relationship would consummate into some workable solution. Obviously it is difficult to have a relationship, a workable relationship with such a man.

Interviewer: We’ve been getting more and more feedback from people in Zimbabwe who are concerned that the MDC is not visible and that they are not hearing from their leader, why is that and where are you?

Interviewer: Do you not think it is imperative for the people to know where their leader is, they voted for you and so, you don’t think they deserve to know where you are, are you in exile?

Mr Tsvangirai: Well you know, the question we hear every time I go out – the people say where is the leader? And sometimes it is very frustrating to answer that question because it may be a question being asked by my own detractors. Our own structures, our own leadership knows where I am and what I am doing, it is part of our programme.

Interviewer: But what this does, if you are not open to the people, a lot of speculation then starts creeping in. For example it is reported that the entire MDC leadership is in hiding so is this true and is this the reason you are still out of the country?

Mr Tsvangirai: No the reason why I am out of the country is I left the country openly and I left the country on a diplomatic mission and the reason why I have not been in is because the government has denied me a passport. I don’t have travel documents as I speak and I am waiting for my passport to be processed so that I can go back. But I am not going to go back because people just want to see my presence. We have to go back because of work we must do internally, we have work we must do externally.

Interviewer: We have seen many leaders in Europe and America speaking out against the regime and calling for Mugabe’s ouster but except for a few leaders in Africa, namely the Kenyan Prime Minister Raila Odinga, there’s really not been much movement supporting calls for military intervention from African countries. First of all, what is your take on the calls for military intervention?

Interviewer: I spoke to some political analysts just a week ago and even some Zimbabweans who say they don’t want a power sharing agreement that involves Robert Mugabe and if I can quote the words of Brian Kagoro, he said Morgan Tsvangirai is better off drinking a bucket full of cholera infested water than go into a power sharing deal with Robert Mugabe. What can you say to those people who don’t want a government of National Unity with Mugabe?

Mr Tsvangirai: Well the thing is everyone knows that everyone is sceptical on Mugabe but you see the thing is that unless you can exercise leadership to find a solution to the crisis through a negotiated route, what else do you have?…

Dear Mr Tsvangirai, it is my small but humble opinion that now is not the time to be sit back and blame Mugabe for everything that is still going wrong even now and watch helplessly as your own people starve and die. The time for “negotiating” with Mugabe came and went now is the time for action.
Dig deep Morgan, fight for Zimbabwe, now is the time to lead a strong resistance against Mugabe’s tyrannical regime once and for all and make the ultimate sacrifice for your country or else all will be lost. 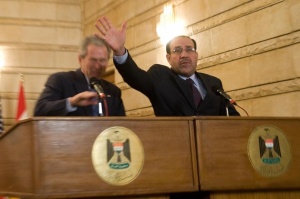 It is often said that one of the fundamental tenets of any democracy is freedom of speech. Bush has always insisted that US occupation of Iraq was meant to “bring democracy” (read: get the oil) to this war-torn Middle Eastern nation.

Therefore judging from yesterday’s incident involving two hand-propelled size 10 Iraqi shoes hurled at Bush’s face during a live press conference in Iraq, I guess your job there is done, Mr. Bush: you even have Iraqi journalists throwing shoes at you just to show just how much they embrace their new found freedom of speech.

On a serious note, a tip of my hat to all the journalists out there that have stood up and spoke out against our often misguided “leaders” and have always challenged status quo whenever injustice and oppression prevails. 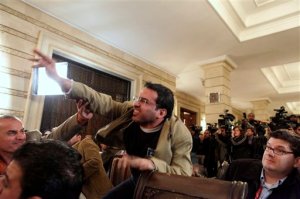 Better luck next time. You almost had him.